NEWSFLASH! FREE SINGING WORKSHOP FOR YOUNGSTERS! CLICK ON OUR NEWS PAGE FOR DETAILS! 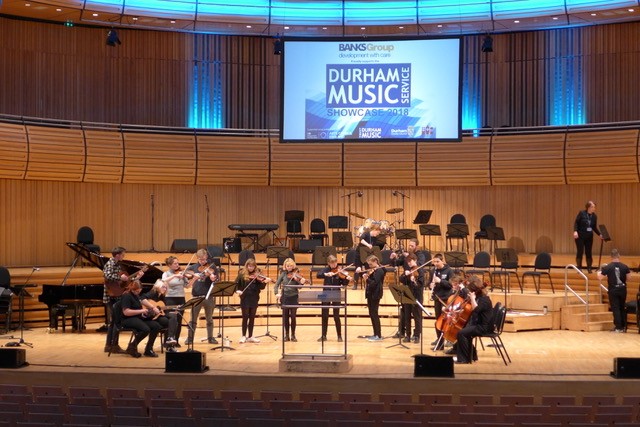 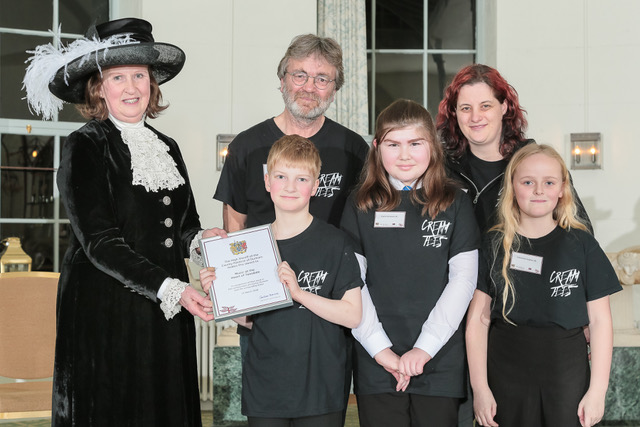 The band, which was established in 2012, was set up to help revive folk music, song and dance traditions in Teesdale, as part of the Heart of Teesdale project. (M@HOT)

Since then, it has grown from strength to strength with the group’s youngest members recently collecting a High Sheriff Youth Award from High Sheriff of County Durham, Caroline Peacock.

The team travelled to Wynyard Hall, near Stockton, to pick up the award, organised by the County Durham Community Foundation. It was given in recognition of all the M@HoT project team’s work with young people and is the second award M@HoT has been received in the space of a month. In February, M@HoT was winner in the ‘Best Social Enterprise’ category in the 2017 Teesdale Business Awards scheme.

Mum Jill McLachlan, whose daughters Heather and Kirsty play in the band, said: “It is wonderful to see all of the young musicians’ hard work and enthusiasm being recognised and celebrated in this way.”

Older members of the band have also been working hard, practising for a rousing performance  which took place in Hall One of The Sage, Gateshead, as part of Durham Music Service’s Showcase event!

She said: “The senior members of Cream Tees delivered a highly accomplished performance of their own composition, Rooted – a Teesdale Suite. It represented an excellent exponent of folk music in a programme celebrating young players of all abilities and different musical ensembles from across the county.

‘Their enthusiasm and confidence meant they commanded the stage and totally engaged the audience. Having worked with the group I have been so impressed by their inclusive attitude to rehearsing and they were a delight and privilege to work and perform with.”

The youngest player in the group is 8-year-old William Clerk. His mum, Rebecca, attended the Sage Performance. She said: “It was an absolutely brilliant evening. Cream Tees were exceptional!”

Deputy Head of the Durham Music Service, Carolyn Norris, agreed. She said:  “They sounded amazing and it made such a nice contrast to have something different to any of our other ensembles. I hope all members enjoyed the experience.”

A third Cream Tees event, which had been planned for Sunday, March 18, had to be cancelled due to poor weather conditions on the day. The gig, entitled a ‘Seasons of Love,’ should have taken place at The Dolphin Centre, in Darlington. It was organised to showcased the talent of over 120 youngsters from the north and marked the end of a year-long collaborative project with Opera North’s youth ensembles.

M@HoT’s project co-ordinator Neil Diment said: “If any young musicians out there would like to be part of the amazing Cream Tees and the award-winning M@HoT team, we are always on the lookout for new members. Just get in touch with me on 01833 638263 or email neil@ndiment.co.uk.”

If anyone would like to read more about any of these events, there was a nice write up of the DMS Showcase event in which Cream Tees gets a mention: https://www.musicdurham.co.uk/blog/celebrating-durham-music-service

And this link to the High Sheriff’s website tells you more about the Awards and features Cream Tees as well as all the other award-winners on the night: http://www.highsheriffs.com/Durham/DurhamAwards.htm.’